V. V. Lakshminarayana on his journey from law enforcement to organic farming

Former CBI Joint Director V. V. Lakshminarayana advocates for living each day to the fullest and emphasizes the importance of mental health.

In an interview with Anjali, the retired IPS officer shared that he is currently pursuing organic agriculture on 12 acres of leased land in the village of Dharmavaram, located between Rajahmundry and Annavaram. He also revealed that after his voluntary retirement in April 2018, he was exposed to public and rural development, and is currently working on his PhD in rural development from Mumbai University.

When asked about his political entry, Lakshminarayana explained that his motivation for entering politics stems from his experiences with undemocratic approaches and a desire to raise issues concerning politics and its association with election procedures. He also mentioned that they will seek the support of the court if necessary.

The former CBI officer also spoke about his current political activities, stating that he is working to raise awareness among the people about their voting rights and encouraging them to make informed choices when selecting candidates for elections. He also shared his experiences in his civil service career and the political pressure he faced.

Mulugu: Revanth Reddy, the TPCC President, is on a tour of Mulugu as part of the Hath Se Haath Jodo Yatra made controversial remarks regarding Pragati Bhavan in Hyderabad. Speaking to the gathering, MP..

Hyderabad: A video of a rat stealing a necklace on display at a jewelry store has taken the internet by storm! IPS officer Rajesh Hingankar shared the now-famous footage on Twitter, and it's causing..

Allu Arjun's photoshoot with fans cancelled for this reason

Tollywood's stylish actor Allu Arjun, who is filming for the highly anticipated sequel of "Pushpa: The Rule," had a scheduled meet and greet event in Visakhapatnam. Despite his punctual arrival dressed in all black,.. 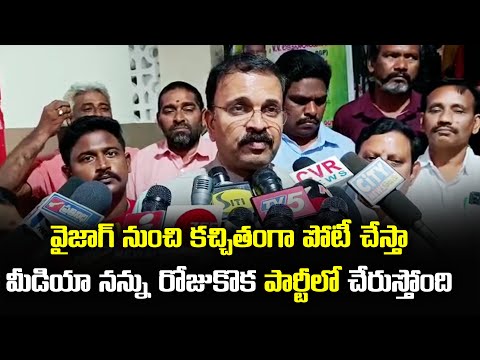