Hyderabad, Nov 26: Constitution Day is celebrated in a grand manner at the Raj Bhavan, here, on Friday.

Governor Dr. Tamilisai Soundararajan, Chief Justice of Telangana High Court Justice Satish Chandra Sharma, High Court Judges, Ministers and other senior officials of the government took part in the celebrations where the rich tributes were paid to the architects of the Indian Constitution.

The dignitaries also read out the Preamble of the Constitution as part of the celebrations.

Speaking on the occasion, Governor Dr. Tamilisai Soundararajan stated that the Constitution has been proving effective in strengthening the country’s unity in diversity.

“The Constitution played supreme role in protecting the rock solid foundation of democracy in India,” she added.

The Governor gave a call to protect and promote the supremacy of the Constitution by promoting the ideals and values enshrined in it.

Dr. Tamilisai Soundararajan expressed gratitude to Prime Minister Narendra Modi for initiating the Constitution Day celebrations since the year 2015 to commemorate the adoption of the Constitution by the Constituent Assembly on November 26th in 1949.

Remembering the services of Baba Saheb Dr. BR Ambedkar in drafting the Constitution as the Chairman of the Drafting Committee, the Governor paid glowing tributes to his contribution in preparing one of the best and the comprehensive Constitutions in the world.

“We can only pay our real tributes to the architects of our Constitution by upholding the values and ideals enshrined in it and by promoting the spirit of Constitution at all levels,” she said.

Chief Justice, High Court of Telangana, Justice Satish Chandra Sharma exhorted all the sections of the people to resolve to rededicate to protect and promote the supremacy of the Constitution and the rule of law in the country.

Earlier, the Governor, the Chief Justice and the Judges of the High Court of Telangana and senior officials of the government and the judiciary offered floral tributes to the portraits of Mahatma Gandhi, Dr. BR Ambedkar, and the Constitution. 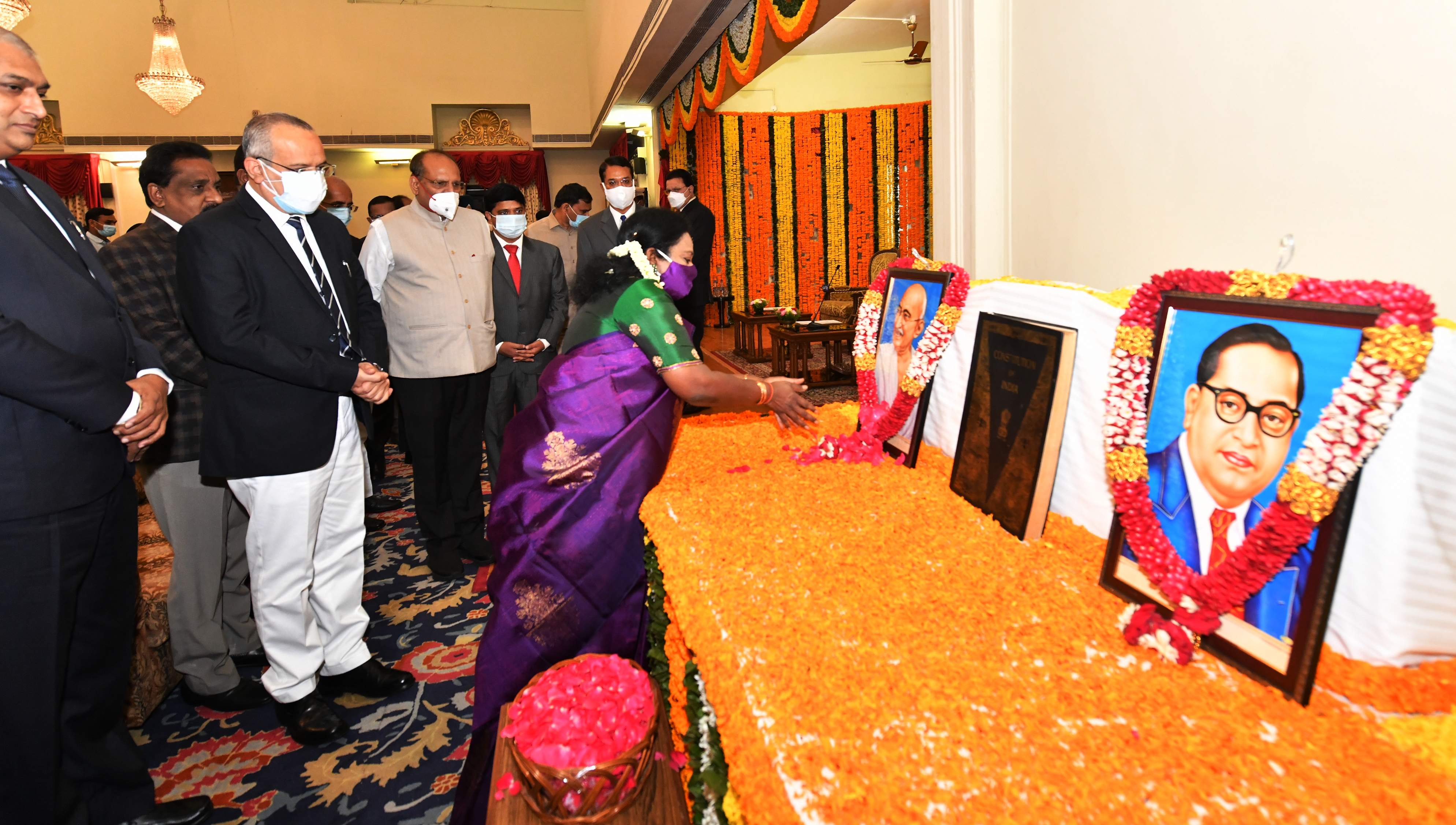 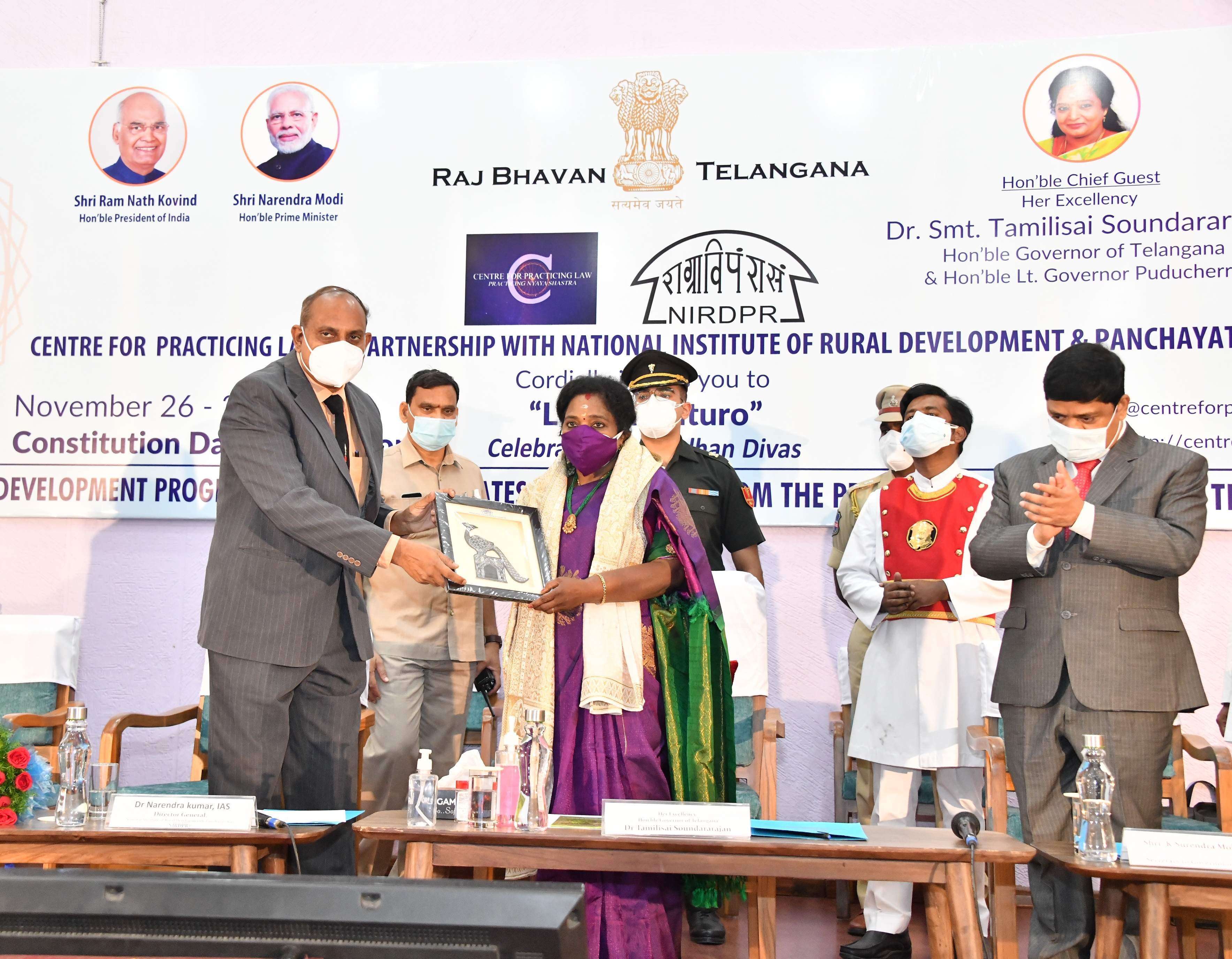 The Governor was inaugurating the training and development programme for the advocates and para-legals belonging to the primitive tribal groups, being organized by the Centre for Practicing Law in collaboration with the National Institute of Rural Development and Panchayat Raj (NIRDPR), at the NIRD campus, campus, here, on Friday.

The Governor expressed concern over the high rates of Infant Mortality and Maternal Mortality among the tribal people and called for concerted efforts to improve their health and nutritional conditions.

“There is an urgent need to improve the healthcare infrastructure in tribal areas and ensure better access to the medical and healthcare services for the tribal people living in remote tribal habitations,” she added.

Dr. Tamilisai Soundararajan called for the sustained efforts to improve the health, nutritional, social, educational and economic status of the tribal people.

The legal training and development programme for the advocates and paralegals belonging to the primitive tribal groups is the brainchild of the Governor, who wanted special efforts to legally empower them.

The Governor appreciated the initiative of Raja Rajeshwari Thaman, director, Centre for Practicing Law, and the NIRDPR in collaborating for the training programme. 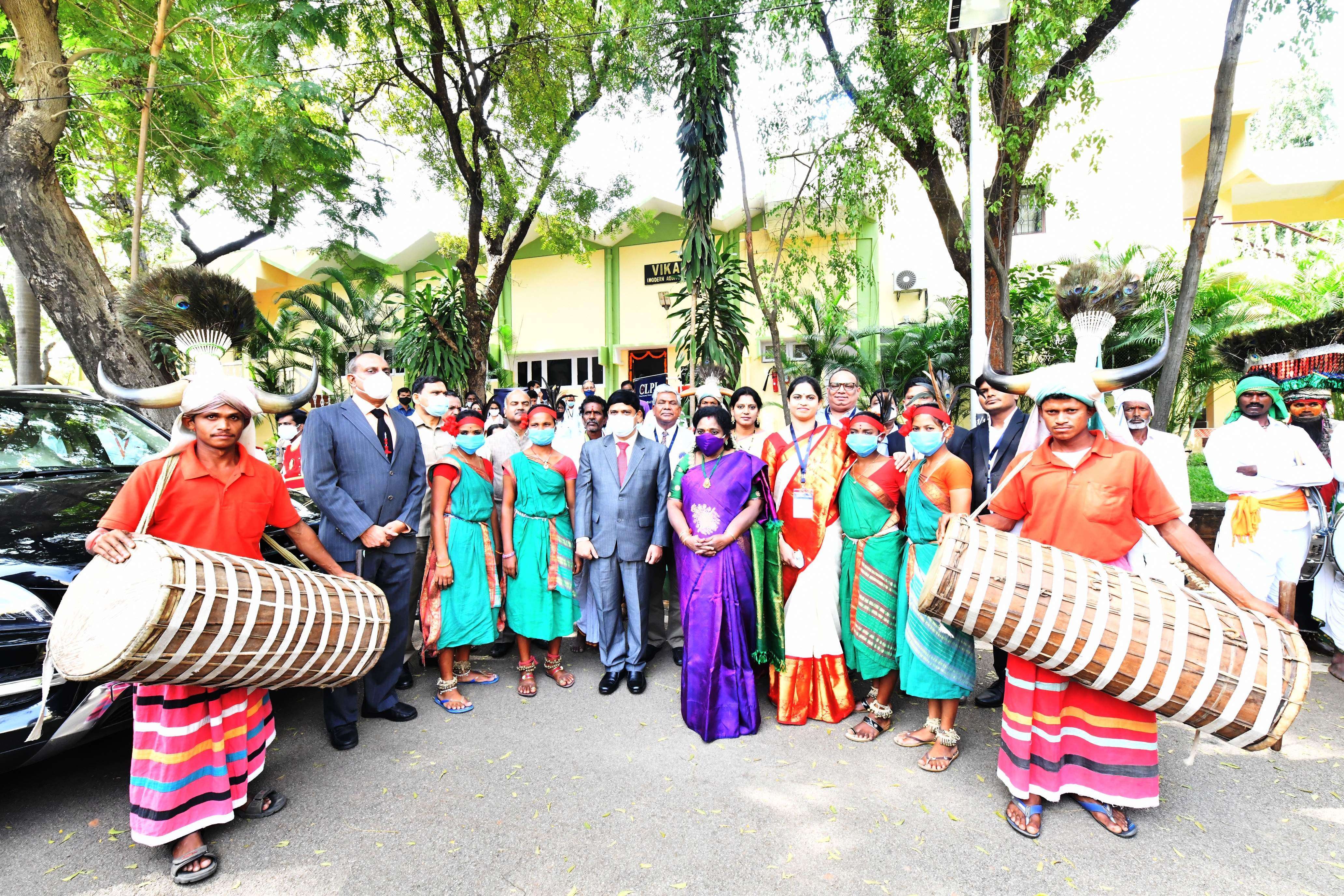 Enjoy the “Comedy Stars” Dhamaka on Star Maa
17 hours ago

Rajamahendravaram gets its first Paradise outlet
3 days ago

Mahindra announces 'Get Highest Mileage or Give Truck Back' guarantee on its entire HCV, ICV & LCV Truck Range
5 days ago