Defence Minister Rajnath Singh reviewed the progress of construction of the first Indigenous Aircraft Carrier (IAC) built by M/s Cochin Shipyard Ltd., at Kochi on June 25, 2021. Rajnath Singh was accompanied by Chief of the Naval Staff Admiral Karambir Singh and Flag Officer Commanding-in-Chief, Southern Naval Command Vice Admiral AK Chawla. The Defence Minister visited the construction site and was briefed about the successful Basin Trials completed during November 2020. He was also appraised of the progress achieved on the integration of a number of other navigational, communication, and operational systems since then, as it prepares for its maiden Contractor Sea Trials (CST) which is expected in the forthcoming months.

The IAC would be commissioned as INS Vikrant in the first half of 2022, which would be the most potent sea-based asset. The ship shall operate MiG-29K fighter aircraft, Kamov-31 Air Early Warning Helicopters, the soon to be inducted MH-60R multi-role helicopter, and the indigenously manufactured Advanced Light Helicopters. It would offer an incomparable military instrument with its ability to project Air Power over long distances, including Air Interdiction, Anti-Surface Warfare, offensive and defensive Counter-Air, Airborne Anti-Submarine Warfare, and Airborne Early Warning.

During the visit, an exhibition showcasing the Indian Navy's various ongoing innovations, indigenisation and operations aligning with the nation's fight against the COVID-19 pandemic was also organised for the Defence Minister. The major exhibits included the Oxygen Recycling System (ORS), which is currently under clinical trials at Sree Chitra Tirunal Institute for Medical Science and Technology; Navrakshak PPE and masks currently being used in PM CARES Hospitals; Remote Patient Monitoring System and several such other innovations which had provided affordable, effective and user-friendly medical solutions.

The Defence Minister was also apprised about the assistance rendered to civil agencies such as the Fire Safety Audit of hospitals and specialised training on PSA Oxygen Plants in addition to an overview of the Samudra Setu II and Oxygen Express Operations. The Defence Minister also interacted with 10-year-old Veer Kashyap, a student of Navy Children School Kochi, who had won the Pradhan Mantri Bal Puraskar 2021 for developing an innovative board game 'Corona Yuga' for educating and creating awareness about the pandemic among the public at large.

The Defence Minister was also informed about the activities being conducted and planned by the Indian Navy towards ‘Swarnim Vijay Varsh’ being celebrated by the Armed Forces to commemorate the victory of the 1971 war and ‘Azadi Ka Amrit Mahotsav’ to commemorate the 75th anniversary of India's Independence.

Rajnath Singh also visited some of the training establishments under Southern Naval Command and appreciated the efforts of the Indian Navy for continuously providing professional training not only to the Officers and Sailors of the Indian Navy but also to friendly foreign Navies even amidst the COVID-19 pandemic. He interacted with the officers and sailors of the Kochi area over lunch traditionally called 'Barakhana'.

The Defence Minister expressed satisfaction at the progress of construction of Indigenous Aircraft Carrier, describing it as a shining example of ‘AatmaNirbhar Bharat’ envisioned by Prime Minister Narendra Modi. He stated that IAC has nearly 75 percent indigenous content - from design to steel used in construction to key weapons and sensors. He recalled a recent approval accorded by the Defence Acquisition Council for RFP of Project 75-I under the Strategic Partnership model, which will give further fillip to the indigenous development of niche manufacturing technologies.

Rajnath Singh highlighted the combat capability, reach and versatility of the aircraft carrier, saying that it will add formidable capabilities in the defence of the country and help secure India's interests in the maritime domain. Appreciating the fact that significant progress was made on the construction of IAC despite COVID-19, he said the commissioning of IAC will be a befitting tribute to 75 years of India's independence.

The Defence Minister reaffirmed the Government’s commitment towards a strong Indian Navy, saying that “IAC and Project Seabird at Karwar, which will be Asia’s largest Naval Base, as the examples of our unwavering focus”. He listed out the measures being taken by the Government to modernise the Indian Navy, with emphasis on indigenisation, which will enhance the Navy's operational reach and prowess. He assured all possible support to the Navy for bolstering their operational preparedness, saying that a strong Naval force is crucial for peace, security, and prosperity.

On the Galwan incident, Rajnath Singh said Indian Navy's proactive forward deployment signalled that the country wants peace but is ready for any eventuality. “Indian Navy remains poised and combat-ready to tackle any challenge,” he said. The Defence Minister reiterated the Prime Minister's vision of SAGAR (Security and Growth for All in the Region) and the wider goal of a free, open and inclusive Indo-Pacific to ensure peace and stability in the region.

The Defence Minister lauded Indian Navy for its contribution in the fight against COVID-19 - from bringing back Indian citizens from overseas during Operation Samudra Setu I and ferrying in Liquid Medical Oxygen from abroad during Operation Samudra Setu lI - despite the danger of the spread of the virus onboard warships. He also commended the Search and Rescue (SAR) efforts by the Navy during Cyclone Tauktae and Cyclone Yaas.

On June 24, 2021, Rajnath Singh had visited the Karwar Naval Base and reviewed the progress of ongoing infrastructure development under ‘Project Seabird’, as part of his two-day visit to the Southern Naval Command. 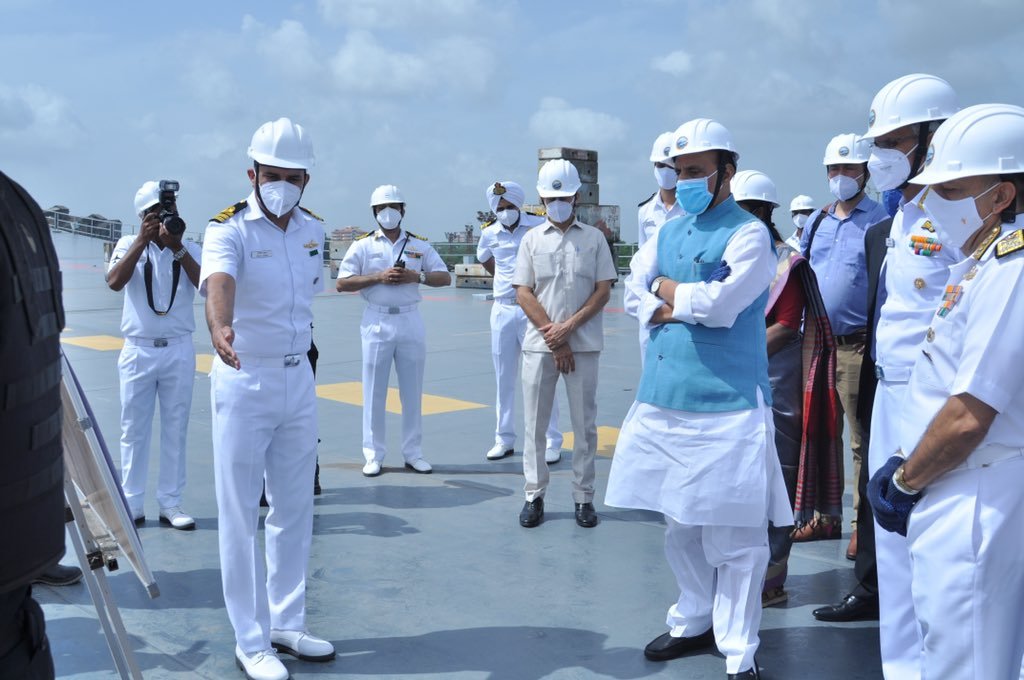 In view of sharp spike in COVID-19 cases, Centre rushes High-Level team to Kerala
21 hours ago

Bharosa will be a one stop support center for women and child victims all forms of crimes”: Telangana Home Minister
1 day ago

Lalawmpuia to join Sudeva Delhi FC on loan
1 day ago

Chandrayaan-3 is likely to be launched during third quarter of 2022: Dr. Jitendra Singh
1 day ago

India gets its 40th World Heritage Site
2 days ago