Mon, Sep 14, 2020, 09:30 PM
The central government has recently submitted an affidavit to AP High Court stating that the center has no role to play in selecting state capital. TDP MP Galla Jayadev, along with his team, met Home Secretary Ajay Bhalla on this aspect and questioned him. TDP MP said if the capital issue does not come under state, central, and the concurrent lists, then according to the article 248 of the constitution, the Parliament has every right to make a law on that subject.

Guntur TDP MP said they have also reminded him about the State Re-organization Act, where there was a mention of a single capital, not capitals. He said the senior officer has also agreed that the government function will be objected if executive and legislative branches are in the two cities. Galla Jayadev said the senior officer would study on this and give his decision.
Related Video Embedded from ABN Youtube Channel.

BJP veteran leader Murli Manohar Joshi on Wednesday welcomed the verdict pronounced by the special CBI court in the 1992 Babri Masjid demolition case. The judgement has proved that there was no conspi..
..More
Advertisement
Galla Jaydev Related Video News.. 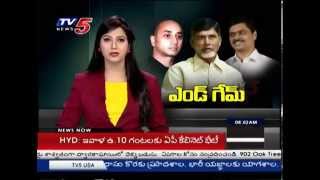