He also lashed out at social media manager for making comments on his wig and he also made satirical comments on him. He questioned YS Jagan whether he knows the difference between the party and the government. Click the video for more information.
Related Video Embedded from ABN Youtube Channel.

In 2017, Hanuma Prasad and Vijay Bhaskar Reddy purchased 11 cents of land in Sattenapalli. However, the land was encroached by land grabbers a few days ago. The victims registered a police complaint. .. 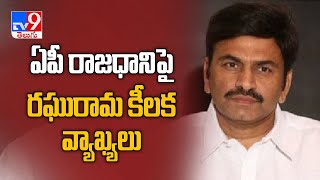