Sat, Aug 01, 2020, 03:40 PM
Deputy Chief Minister Dharmana Krishnadas on Saturday said that foundation stone for the Office of the Chief Minister would be laid in Visakhapatnam on August 15. Speaking to the media, Krishnadas, who holds the revenue portfolio, said that the offices shifted from Amaravati will be accommodated in the existing government and private buildings in Visakhapatnam. “At the same time, the construction of new buildings will be taken up,” he mentioned. He thanked the Governor for giving his assent to three capitals Bill. North coastal Andhra region will witness rapid growth with the setting up executive capital in Vizag, he said.
Related Video Embedded from Youtube.

Tollywood young actor Akhil Akkineni has spent some time with the police training members of Telangana state. On the occasion of 74th Independence Day, the actor has boosted the spirit of these traini..
..More
Advertisement
Dharmana Krishnadas Related Video News.. 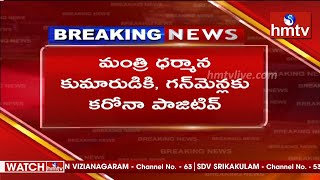