Fri, Jul 10, 2020, 10:48 AM
Film critic Kamaal R Khan took to his Twitter account and revealed that he has received three threat calls demanding him to stop talking about Sushant Singh Rajput’s tragedy. Here’s what Kamaal has to say about the same, “Today I got three phone calls asking me to stop talking about Sushant’s suicide. They threatened to eliminate me if I won’t stop. If anything will happen to me. So you all people know very well who is the culprit.” Sushant’s death has raised the issues of nepotism and favouritism in Bollywood.
Related Video Embedded from Youtube.

Hyderabad CP Anjani Kumar said in the modern world, the internet's use and need can not be denied. In a press meet, Hyderabad Commissioner of Police has alerted people stating that some online cri..
..More
Advertisement
Kamaal R Khan Related Video News.. 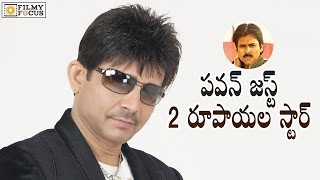