Thu, Jun 04, 2020, 11:39 AM
Raju, who was working as a keyman under the limits of Vijayawada railway station, has committed suicide by consuming soft drink mixed with pesticide. He made a selfie video of drinking the pesticide-laced drink and revealed the names of officials, who were harassing him. Raju, a native of Rayanapadu village in Ibrahimpatnam mandal in Krishna district, died while he was being shifted to the government hospital. Doctors of the hospital have performed post-mortem and handed over the body to family members. The police registered a case and took up the investigation.
Related Video Embedded from AP24x7 Youtube Channel.

South Indian actress Shruti Haasan was seen sweating out at her home with intense workouts at home. Several film celebrities are doing exercises indoors to be fit at home because of the lockdown. Rece..

Reportedly, superstars Hrithik Roshan and Prabhas to team up with Tanhaji: The Unsung Warrior director Om Raut for his next action film. Both Hrithik and Prabhas are considered as action heroes and ha..

The Shamshabad police took techie Lavanya Lahari’s in-laws into custody in East Godavari district. Software engineer Lavanya had committed suicide by hanging in her house at Rallapally in Shamshabad..

The coronavirus threat continues all across the world. All the world's major nations are struggling to find a suitable vaccine for the treatment of the deadly virus. As part of it, in Hyderabad, the c..

Vishal Film Factory’s accountant Ramya has alleged that actor Vishal is not a real hero in life. “He will ruin the lives of people whom he doesn’t like,” she revealed. A few days ago, VFF’s ..

Corona cases are on the rise in the two Telugu states of Andhra Pradesh and Telangana. In the last 24 hours, a total of 1178 number of corona cases got registered in AP. Out of this, 1155 cases are f..

MLA RK Roja has flagged off 108 and 104 ambulances at Nagari in Chittoor district. A few days ago, Chief Minister YS Jagan Mohan Reddy had launched 1,088 ambulances at Benz Circle in Vijayawada. On th..

Bollywood actress Katrina Kaif is a fitness freak, and she keeps on entertaining her fans by posting her latest activities, be it her film updates or any personal aspects. She has recently participate..

Chief Minister YS Jagan Mohan Reddy on Tuesday said that distribution of house-site pattas to 30 lakh beneficiaries were postponed as the cases filed by the TDP leaders are pending in the Supreme Cour..

In an interview, Chinni Prakash Master said megastar Chiranjeevi is the only best and top dancer in South India. “Chiranjeevi grasps dance moves and performs on screen with ease,” he narrated. Pra..

Former India Cricket captain MS Dhoni has turned 39 on Tuesday. The Ranchi hero has been receiving birthday wishes from his teammates, fans and other well wishers from all around the world. His wife ..

Popular anchor and Tollywood artist Jhansi said that she was in isolation as two of her colleagues have tested positive to coronavirus. She advised websites and YouTube channels not to spread false ru..
..More
Advertisement
Railway Employee Related Video News.. 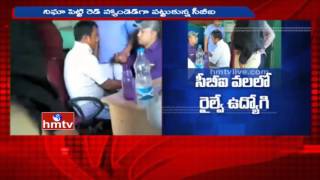