Fri, May 22, 2020, 05:05 PM
In a shocking incident, nine migrants including six of a family found dead in an abandoned open well at Gorrekunta village Geesugonda mandal in Warangal district. The police retrieved four dead bodies on Thursday evening and five more on Friday. The bodies were shifted to MGM mortuary and post-mortem was performed.
The police are suspecting that an illegal affair might be the reason for the gruesome crime. According to sources, one person killed 8 and later he committed suicide. Four police teams were formed to crack the mystery behind mass murders. The police officials are confident of resolving the case by Friday night.
Related Video Embedded from Tv9 Youtube Channel. 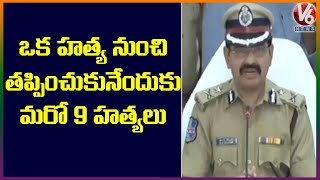 Warangal CP explains sequence of events that led to killing of nine
..More