Thu, Apr 09, 2020, 02:26 PM
Former Sirpur Kagaznagar MLA Kaveti Sammaiah has passed away due to prolonged illness. He is survived by his wife and three sons. Telangana CM KCR has conveyed his condolences to members of the bereaved family. Some of the Telangana ministers and Congress party leaders have consoled the death of Sammaiah. Reports suggest that Sammaiah was elected twice for the state legislature in 2009 and 2010 and lost the 2014 elections. After the defeat, Sammaiah has stayed away from active politics. In the 2018 election, Kaveti Sammaiah joined Congress.
Related Video Embedded from ABN Youtube Channel.

During an interaction meet with students as part of ‘Mana Palana-Mee Suchana’ programme on Wednesday, a postgraduate student by name Chandrika has surprised Chief Minister YS Jagan Mohan Reddy by ..

‘Crime Patrol’ actress Preksha Mehta was found hanging at her residence in Indore, Madhya Pardesh, a little excerpt from her suicide note has been released by police officials. In an interview, a .. 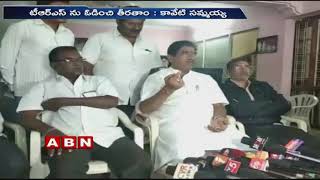