Wed, Nov 20, 2019, 11:33 AM
Shweta Reddy reacted on the IT raids which are being conducted on Ramanaidu studios in Film Nagar and producer Suresh Babu’s house. She criticized that Ramanaidu and his family members who give lectures on how to develop as an entrepreneur doesn’t know to pay Income tax. She added that there were many cases that Ramanaidu doesn’t allow the small budget films to hit the theatres. She told that Narendra Modi is in the centre and he will not encourage illegal activities. She further added that he won’t spare anyone who doesn’t pay taxes. She also took a dig at Akkineni Nagarjuna, Megha Krishna Reddy and various other persons. She requested Ramanaidu and Nagarjuna that not to play with the lives of girls as they also have daughters and sisters in their families.
Related Video Embedded from Youtube.

The incident of Air India Express flight crashing at a runway at Kozhikode international airport on August 7th is an example of a tabletop crash. This type of crash on the tabletop runway has brought ..
..More
Advertisement
Shweta Reddy Related Video News.. 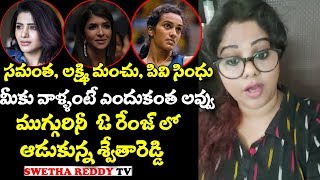