Mon, Oct 28, 2019, 09:41 AM
Shweta Reddy a journalist is well known for making controversial statements. Recently, a few celebs of Tollywood like Samantha Akkineni, Manchu Lakshmi and PV Sindhu took to their twitter and congratulated ‘She Teams’ which have completed 5 years. They told that all the women feel safe and protected in this ‘Bangaru Telangana’.
Reacting on this, Shweta told that 'She Teams' work only for the families of Samantha, Lakshmi Manchu and PV Sindhu. She also told that 'She Teams' protect the actors even after they were found drunk driving. She told that no one responded when she and few others raised a complaint against the show, Bigg Boss.
Related Video Embedded from Youtube.

HYDERABAD: Tension escalated at Champapet after an amputated human leg was found on the main road abutting open Nala. According to the sources, the locals of Reddy Colony, Champapet found a human leg ..
..More
Advertisement
Shweta Reddy Related Video News.. 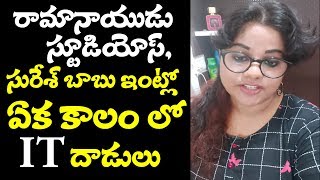 Swetha Reddy comments on IT Raids on Ramanaidu Studios
..More