Mon, Oct 21, 2019, 09:50 PM
After the defeat of TDP in the recent election in Andhra Pradesh, former Chief Minister Chandrababu Naidu has begun conducting a review meeting in each district. In the recent meeting in Visakhapatnam, TDP Chief Chandrababu Naidu has once again reportedly expressed his opinion to make an alliance with BJP. This has been condemned by the state BJP leaders including the party-state President Kanna Lakshminarayana and other senior leaders. Kanna Lakshminarayana has even reminded the comments of BJP National President Amit Shah that the doors for TDP are closed in BJP.
Related Video Embedded from ABN Youtube Channel.

Home work out the video of Lakshmi Manchu shared online is sure to lift your fitness spirit. Lakshmi Manchu is one of the celebs who maintain a perfect physique and prefers to stay strong and healthy ..
..More
Advertisement
Chandrababu Related Video News.. 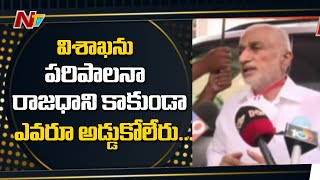