Sun, Oct 20, 2019, 09:36 AM
A clothing company has put up a 30-foot-high billboard in New York City's Times Square that portrays President Donald Trump look-alike being hog-tied by a woman clad in its athletic wear. It was displayed as part of an advertising campaign by Dhvani, a Portland-based clothing company. There was an increase in traffic to the company's website, along with an increase in sales, since the billboard went up. However many have criticized the way, the clothing company has been campaigning. Some sections of people have been enjoying it by making satirical comments.
Related Video Embedded from Tv9 Youtube Channel.

Coronavirus has a drastic impact on tourist destinations worldwide. The Gujarat government has made a plan to promote the 'Statue of Unity' and the 'tent city' as a place for destination weddings. T..
..More
Advertisement
Times Square Related Video News.. 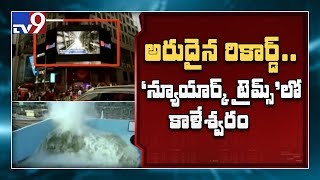