Tue, Oct 08, 2019, 01:13 PM
Presenting herewith the theatrical trailer of the film 'Krishna Rao Super Market',. It is an upcoming Telugu film featuring actors Kriishna, Elsa Ghosh in the lead roles. Tanikella Bharani, Banerjee, Ravi Prakash, Surya, Gowtham Raju and Sana are other casts of the movie. Famous comedian Gautam Raju’s son Krishna has been introduced as a hero in this film. BJR as presenter, BGR Film And TV Studios has been bankrolling the project with Srinath Pulakuram as director.

Krishna Rao Super Market movie is a love story blended with suspense. It is Elsa Ghosh's first film in Telugu, in which she plays the role of a software engineer.
Related Video Embedded from Youtube. 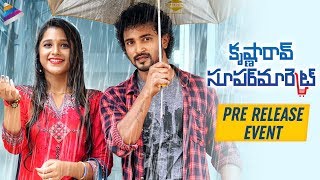