Sat, Oct 05, 2019, 04:10 PM
The battle of the Medallion war between the contestants is currently underway in the Bigg Boss Telugu 3 hosted by King Nagarjuna. With only four weeks remaining before Big Boss Season 3 to end, the medal fight between Vithika and Baba Bhaskar has turned a little bit controversial.

Host Nagarjuna has questioned the stand of Vithika in the task and took a dig at her game plan. Though she defended herself citing some examples, the host is unmoved with her explanation.

South Indian actress Samantha made her debut with Ye Maaya Chesave movie in 2010. Naga Chaitanya was the male lead in the film. Samantha’s friendship with Naga Chaitanya had blossomed into love and ..
..More
Advertisement
Bigg Boss Telugu Related Video News.. 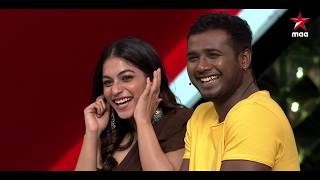