Thu, Sep 19, 2019, 10:49 PM
The release of Valmiki film featuring actor Varun Tej directed by Harish Shankar has been deferred in the Rayalaseema districts of Kurnool and Anantapur following severe objections raised by the Boya community. The district collector of Kurnool has issued an order to stop the release of the film in the district citing law and order issues. As Boya caste is major community in the district, the said order has been issued. Anantapur MP Talari Rangaiah has objected the makers of the film for not respecting the sentiment of the said community.
Related Video Embedded from Etv Youtube Channel.

The COVID-19 pandemic has forced the Cricketers to stay at home. Some players have returned to training individually after the government has eased restrictions in the fifth phase of lockdown. India c..
..More
Advertisement
Varun Teja Related Video News.. 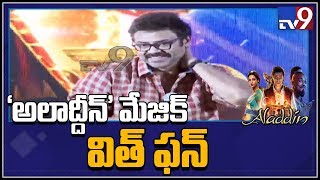