On the other hand, the demised body of former Speaker will reach the Guntur party office a short while from now from Hyderabad.
Related Video Embedded from Tv9 Youtube Channel.

Shaktikanta Das, RBI Governor said the Indian economy has begun showing improved signs of getting back to normalcy. It is only possible because of taking several regulatory initiatives. In a press..
..More
Advertisement
Kodela Shiva Ram Related Video News.. 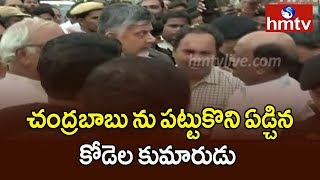