Wed, Aug 07, 2019, 10:28 AM
TV actor Madhu Prakash's wife Bharathi has committed suicide at Panchavati colony in Manikonda. Rayadurgam Police have shifted the dead body of Bharathi to Osmania Medical College for postmortem. Family members of Bharathi have alleged that for the past some time, there was some misunderstanding between them and further alleged that Madhu Prakash has been torturing his wife Bharathi. Earlier Police have reportedly given counseling to the couple after Bharathi complained to the Police.

Madhu Prakash has acted in Baahubali film as a character artist and he has been doing some serials.
Video is not Available for this News

More than 7-8 Lakh Indians could be forced to leave Kuwait if a new expat bill had been implemented. Sources said that the Legal and Legislative Committee of the National Assembly of Kuwait has accept..
..More
Advertisement
Madhu Prakash Related Video News.. 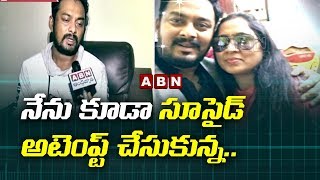 TV Actor Madhu Prakash F to F over His Wife Self Demise
..More