Mon, Aug 05, 2019, 01:54 PM
Tollywood Actor Uttej said after acting with Mega Star Chiranjeevi in Master film, he became a family member to Mega Star. In an interview with a media channel, the senior actor has revealed that he is more closely associated with Chiranjeevi and Naga Babu and added that he used to watch Pawan Kalyan at that time. He has shared how his bond with Pawan Kalyan has increased after the film of Gudumba Shankar. Reacting to questions on politics and AP CM Jagan, actor Uttej said he has no broad knowledge on politics and added that he expected the win of YSRCP Chief YS Jagan Mohan Reddy as the Chief Minister of the state. Watch the full interview.
Related Video Embedded from Youtube.

South Indian actress Samantha made her debut with Ye Maaya Chesave movie in 2010. Naga Chaitanya was the male lead in the film. Samantha’s friendship with Naga Chaitanya had blossomed into love and ..
..More
Advertisement
Actor Uttej Related Video News.. 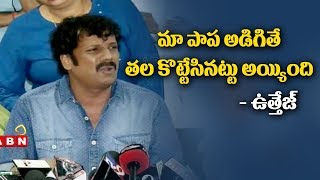