Wed, Jun 19, 2019, 10:55 PM
Raga Madhuri, a Telugu serial actress, lost her chain, following which, she filed a police complaint at the Banjara Hills Police Station. The actress after searching the lost Golden Chain and discussing with the production manager and others approached the Police and filed a complaint. Speaking to a media channel, the actress has shared how she found her gold chain missing after going home and what steps she took the next day. According to sources, the accused attacked Raga Madhuri to take revenge, as the actress filed a police complaint against them. Watch the video for more insight.
Related Video Embedded from Tv9 Youtube Channel.

Andhra Pradesh Chief Minister YS YS Jagan Reddy has expressed shock and grief over the fire incident at Vijaywada's makeshift hospital in a hotel. CM Jagan inquired about the cause of the blaze that l..
..More
Advertisement
Raga Madhuri Related Video News.. 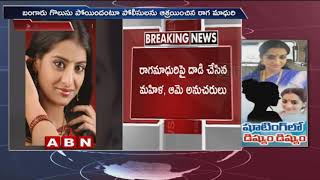