Thu, May 16, 2019, 07:30 PM
Watch the theatrical trailer of the film Lisaa. It is the first upcoming Telugu 3D stereoscopic horror film. Anjali, Sam Jones and Brahmanandam are playing lead roles in the movie. The film is directed by Raju Viswanath and music is composed by Santhosh Dhayanidhi. The movie also features Makarand Deshpande, Mime Gopi, Yogibabu, Saleema, Surekha Vani, Kalyani Natarajan, and Sabitta Roi. Lisaa is produced by PG Muthaiah under the banner of PG Media Works. The movie is slated for release on May 24th.
Related Video Embedded from Youtube. 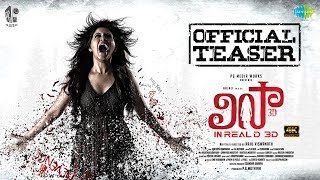