Fri, Feb 08, 2019, 08:44 AM
Lavanya, the wife of a trainee SI Nagarjuna, staged a protest in front of the police station at Achampet in Guntur district on Thursday, seeking justice. She said that Nagarjuna had proposed her while she was studying B Tech in Nellore. They got married in the presence of elders. Lavanya alleged that Nagarjuna was planning to marry his relative for dowry. Trainee SI left Lavanya at her mother’s place so that he can marry another girl. She showed a marriage certificate and photos clicked during the marriage as proof.
Related Video Embedded from HMTv Youtube Channel. 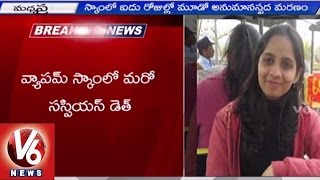