Thu, Jan 03, 2019, 10:08 AM
A man, who was injured in the clashes in Kerala after the entry of two women under the age of 40 into Sabarimala temple on Wednesday, died late last night. An umbrella organisation of various right-wing groups has called for a dawn-to-dusk shutdown in the state today. They blocked highways and forced closure of shops. Even, the Congress also observed ‘Black Day’ on Thursday. But, trade unions have opposed the bandh and Kerala police chief instructed the police officials to ensure normal life is maintained.
Related Video Embedded from NDTv Youtube Channel. 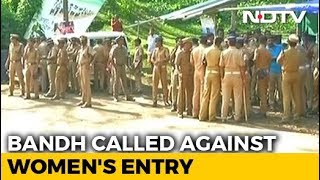