Fri, Dec 07, 2018, 01:29 PM
Nizamabad TRS MP K Kavitha said everyone should utilize the right to vote. TRS MP said there is a growth of the voting percentage this year while comparing the same with the previous year. MP Kavitha said there is more awareness in the urban areas than that of the rural areas. She has cast the vote along with her family members in her native place Pothangal. She has expressed happiness saying that the people of her village have come in large numbers to cast their votes. She has asked the people of the City to come and vote selecting the right candidates.
Related Video Embedded from Tv9 Youtube Channel.

TDP President Chandrababu Naidu said for the sake of the state only; they have built Amaravati as its capital. Addressing a press meet, the former Chief Minister said the centre supported the capital ..
..More
Advertisement
K Kavitha Related Video News.. 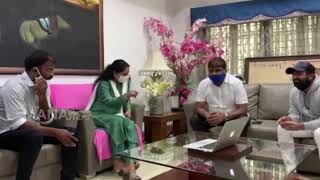