Mon, Nov 19, 2018, 06:52 PM
Tollywood actor, Sharwanand was seen dancing, with the 'Irumudi' on his head, at a pooja for Ayyappa Swamy. He was seen performing harati among other devotees, singing devotional songs. Sharwanand is the winner of Best Male Debutant actor, at the First South Indian Internationa Movie Awards in 2012. A native of Hyderabad, Sharwanand is passionate about films and dancing. He is a trained dancer. He attended Kishore Namit Kapoor Acting Institute in Mumbai. Sharwanand is a cousin of another Tollywood actor, Ram Pothineni.
Related Video Embedded from NTv Youtube Channel.

Bollywood action hero Akshay Kumar has shared a heartwarming message to people on the occasion of Independence Day. The actor has shared the struggling lives of the roadside vendors engaged with their..
..More
Advertisement
Actor Sharwanand Related Video News.. 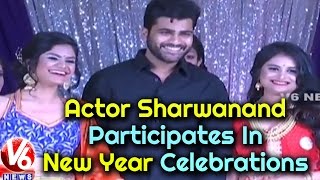