Sun, Nov 18, 2018, 10:26 AM
Watch and enjoy motion teaser of Nayanthara in Syeraa Narasimha Reddy. It was released on the occasion of her birthday. Nayanthara is playing the role of princess Siddhamma in the movie. Megastars Chiranjeevi and Amitabh Bachchan are playing lead roles in the film. The movie also stars Jagapathi Babu, Tamanna, Kichcha Sudeep, Vijay Sethupathi and Brahmaji among others. The magnum opus is being directed by Surender Reddy. Produced by Ram Charan under the banner of Konidela Productions. Music for Syeraa is composed by Amit Trivedi. The film is releasing in Telugu, Tamil, Kannada and Malayalam languages.
Related Video Embedded from Youtube. 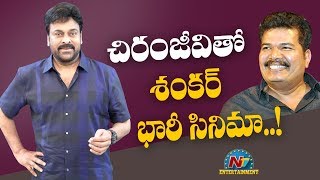 Chiranjeevi to team up with Robo director Shankar
Advertisement
..More