Fri, Aug 31, 2018, 10:00 PM
BJP MLC N Ramachandra Rao reacted over KTR comments on BJP stating BJP has no existence in Telangana while quoting GHMC elections as example. He also denied to respond on TRS alliance with BJP which has only 5 MLAs who lost their significance in their own constituencies. Responding on these comments of KTR, BJP MLC Ramachandra Rao said, TRS has lured people with Double Bed Room houses and won GHMC elections by cheating people. He said, Hyderabad people are vexed with TRS & MIM and looking forward for BJP. Ramachandra Rao said, BJP is getting ready with candidates for elections.
Related Video Embedded from ABN Youtube Channel.

A video of a man cutting a palm tree has left people not only shocked but also confused. The moment the video was shared on social media, it went viral, and it is trending. So far, over 6 million view..
..More
Advertisement
MLC N Ramachandra Rao Related Video News.. 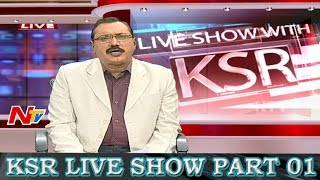