Tue, May 01, 2018, 04:12 PM
With the induction of senior leader Nagam Janardhana Reddy into Congress, groupism has reportedly surfaced in Mahbubnagar district. Congress cadre of the district has been facing the political heat as Nagam's entry has turned a political unrest in the district. It is alleged that party senior leaders failed to communicate properly with the remaining leaders over the induction issue of Nagam Janardhana Reddy. Some of the senior leaders have objected that without intimating them, Nagam has been inducted into the party. Earlier Congress MLC Damodar Reddy from Nagarkurnool belonging to the group led by former minister D.K. Aruna said that there was no use of inducting Janardhana Reddy into the party against the wishes of Congressmen in the district. Watch the video for more insight.
Related Video Embedded from NTv Youtube Channel.

The threat of corona cases continues in Telangana. The total number of cases has so far crossed 80 thousand in the state. According to the bulletin revealed by the Telangana state health department, 1..
..More
Advertisement
Nagam Janardhana Reddy Related Video News.. 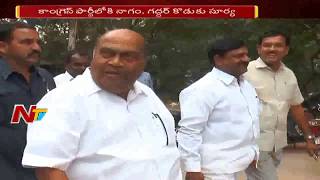