Sat, Apr 21, 2018, 11:44 AM
Luxury Cars scam has been busted by Hyderabad Police after complaints were lodged by politicians and celebrities. A person named Akash has cheated people after ensuring luxury cars for 30 per cent less price. It is learned that he has collected Rs 30 crore from the politicians and celebrities. The accused has also appointed brokers to collect the money. It is learned that an MP's son was cheated by Akash recently and settled the matter with the accused. The Task force police are investigating the accused.
Related Video Embedded from NTv Youtube Channel.

Shaktikanta Das, RBI Governor said the Indian economy has begun showing improved signs of getting back to normalcy. It is only possible because of taking several regulatory initiatives. In a press..
..More
Advertisement
Luxury Cars Related Video News.. 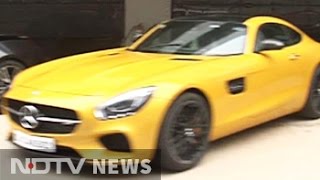