Tue, Feb 06, 2018, 12:25 PM
Moula-Ali constable Sandeep has committed suicide under a running train. He was in an illicit relation with a married woman which was revealed with proofs by the woman's husband Nagarjuna. Nagarjuna has complained in Shamshabad police station over Sandeep's trapping his wife and taking her to various places for weeks. Reacting over the complaint, police started investigation and suspended him from duties while taking action. Disappointed Sandeep has committed suicide. Police found his dead body on the railway track and sent his body for post-mortem.
Related Video Embedded from NTv Youtube Channel.

In the honour killing case, Gachibowli police arrested 12 accused including Avanthi’s father and uncle on Friday. The CI said no supari gang was involved in the murder of Hemanth. All the arrested a..
..More
Constable Sandeep Related Video News.. 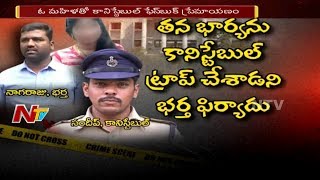