Tue, Jan 30, 2018, 10:06 AM
Before we forget ASP and CIs extramarital relationship episode, a husband lodged a complaint with the police saying Constable Sandeep trapped his wife. Going into details, Nagaraju was married to Sneha three years ago. The couple was blessed with one child. Suspecting some foul in her attitude, Nagaraju kept vigil on the movements of his wife and to his surprise he learned about her relationship with Sandeep. Nagaraju said his wife has been in a relationship with Sandeep for a long time and said they even got married. Nagaraju demanded the police to file cases against the accused. Police suspended the Constable. Meanwhile, Sandeep said that Sneha is his wife and they have been living together.
Related Video Embedded from NTv Youtube Channel.

Telugu Bigg Boss season 4 is entertaining the viewers with new tasks and nomination process. On Saturday, Nagarjuna expressed anger on the Bigg Boss housemates over their behaviour in the house and as..
..More
Advertisement
Constable Sandeep Related Video News.. 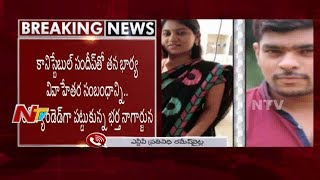