Tue, Dec 19, 2017, 06:58 AM
Six people were killed as two train carriages have plummeted on to the motorway in Washington state. The train derailed and the carriages fell onto the highway. Images from the scene show emergency services treating people on the ground. Amtrak confirmed that there had been injuries. Several cars on the highway were struck by the derailed carriages, the Pierce County Sheriff's department says. Sheriff's department spokesman Ed Troyer has told local media that there are fatalities and people are still trapped on the train.
Related Video Embedded from Youtube.

The fire incident at a makeshift hospital at Vijayawada's Swarna palace hotel has shocked the entire nation. The mishap has reportedly claimed seven lives, and the death toll is likely to increase. AP..
..More
Train Crash Related Video News.. 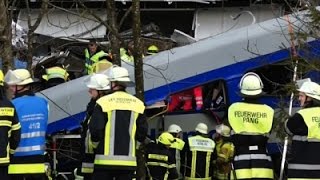