Sat, Jul 22, 2017, 10:12 AM
Locals had an attachment with a langoor which used to roam in and around the premises of the Tahsildar office in Vikarabad. All of a sudden langoor died. The death of langoor has moved locals as they had an association with her whenever they went to Tahsildar office. They performed last rites for the dead animal as they do for human beings. A pit was dug in the premises of Tahsildar office and langoor was buried. Locals said that langoor was lucky enough to get final rites.
Related Video Embedded from HMTv Youtube Channel. 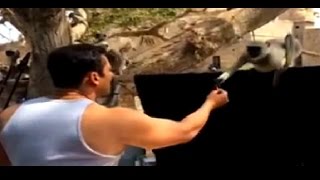